I went for a ride with the youth group of the Apostolic church in which I sing. The whole choir went. And the priest and deacons. Groups from several other churches in the region also went. Bishop Bagrat Galstanyan, the head of the Apostolic church of Tavush region where I live, had decided it would be a good idea to bring everyone together in the spirit of bolstering spirituality and religious fellowship. As a minister’s daughter I’m quite familiar with this kind of outing. For Armenians, whose religion was squelched during the 70-year Soviet era, a rise in spirituality is probably desirable. For Bishop Bagrat, it’s the foundation for what Armenia will decide to become as it matures into a developed country.

We rode in vans out to the border between Armenia and Azerbaijan, a trip I had to get permission for from the Peace Corps safety and security officer. I assured him I’d be spending the day with our priest and would come home safely. Checking with border security, he decided I could go, border tensions being at “the new norm” since the four-day war last April. The “new norm” keeps changing, the extra death of a cow or peasant on a per-month basis not warranting high alert apparently. At least there was no active rifle or artillery fire at the current time. And so we went, just touching the Azerbaijan border when we stopped the vans to board what I learned were Soviet Ural trucks, machine monsters that each held about 50 of us. Veering away from the border, the heaving and grinding trucks made their way onto the dirt road that would take us 12 kilometers to Kirants Monastery.

Bishop Bagrat told me he wanted us to spend time together in fellowship. Well, that we did. Riding along a deeply rutted dirt road, the Urals tipped dangerously, wrenching their occupants from side to side, us bumping into each other, everyone grasping and white-knuckling the truck sides, some on the interior holding on to a pole running across the truck, bracing the sides. I positioned myself with knees slightly bent, remembering riding the high rolling waves on a transatlantic freighter long ago, getting my “sea legs” this way by shifting my weight from leg to leg. Only these were jolts, not waves. I had managed to get myself on the river gorge side of the truck, the ground on the side of the road immediately dropping into a visually striking descent to the Kirants River an uncomfortable distance below. At times, I was grateful for the deep ruts which seemed to be all that was keeping us from toppling down into the gorge. If that didn’t work, I wondered which would kill me first –  crashing on the side of the gorge or being crushed by my Armenian friends sliding full force into me.

On we went, fellowship feelings swelling to an inspiring pitch. No reasonable conversation being possible over the din of truck and forest, the youngsters bellowed Armenian songs, some national, some liturgical, encouraged by the black-robed priests and deacons in our midst. Not knowing any of the songs, my alto-humming was swept up in the audio current that resounded through the spectacular forest in which we were travelling. The deep chords of Armenian passion at other moments on the ride were a backdrop to my thoughts and impressions, one of which, unfortunately, was of lowing cattle being driven in similar trucks to slaughter, as the sides of the truck came up to my chest and I felt somewhat of a victim of circumstances.  This impression was quickly replaced by another, more horrific one, of human victims riding to camps for genocide, the passionate Armenian chants turning to sorrowful lament and resignation. At this moment of deep reflection, an overhead branch slapped the side of my head and brought me back to the more peaceful reality of the present. 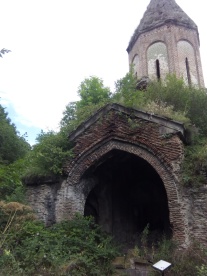 An hour passed, all of our fingers, hands and feet now sore from the constant balancing and bending under tree boughs. “This must be one hell of a monastery, Bagrat,” was my inner, unexpressed conclusion. The Urals were now slogging over wet roads traversing the shallow river, at some points in mud so deep I thought we would never be able to get out. I imagined walking back on this “road” to the vans, our trek taking hours. But the Urals prevailed and gradually we made our way to the path to the monastery. Bushwhacking our way up the trail, we eventually made it to the dirt and grass covered ruin of a monastery. I was not impressed. Perhaps it was the long ride, or maybe the crumbling edifice and boulders I had to step over and around to get into the church, the floor of which was dirt and rock strewn, offering no place to sit. Our fellowship crusade took on a somber note as our spiritual revelers took positions along the wall, myself included. 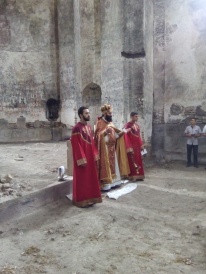 Apparently, there was to be a service of some kind. A ceremonial event, I imagined. An offering of prayer in this 13th century ruin, a few moments of bowing to Armenian antiquity and honoring such a trauma laden history. The priests donned their splendid robes and took up their roles in the pageantry. Again, as a minister’s daughter, I could hear the swish of my father’s robe and feel its red velvet brush my arm as he readied himself for service, putting on his Sunday sermon face, though saving a little wink for me as he passed from the rectory to face his congregation. And so passed a moment of pleasant spirituality for me taken from a memory and juxtaposed on this amazing scene of modern day priests in an ancient sanctuary.

Over a very long hour later, I was nearly choking on the dust whirled up by those walking past. I had thoroughly examined all the features of the church. It’s the only brick and mortar monastery in Armenia as well as bearing inlaid and exquisite tilework. It hosts frescos of saints on its interior, though they are badly faded. Graffiti climbs the walls up to the height of the frescos, threatening their visibility. I walked outside, climbing over the boulders and dirt clumps to get there. Stumbling over snarled masses of high weeds I made it to the old refectory, a massive brick building, an incredible intricacy of brickwork creating a vaulted ceiling resting on gigantic arches. I was impressed here. For a solitary moment, standing alone in this great hall, I imagined the monks gathered together around a huge wooden table for their meal, flasks of wine at the ready, knobby field-worked hands passing beautifully made pottery full of fruits and steaming dishes of pork and fresh vegetables. Joined by other conversing visitors, my rumination was lost and I was again standing on the dirt and rubble floor of a ruin with a glorious past.

Why had we come? I knew Bagrat’s intent and appreciated that. But why here? I’d been to many monasteries in the two years I’d spent in Armenia. Monasteries in much better shape than this one. Churches tremendously more accessible than this one on a hazardous 12 kilometer road. I was asked that day, by an adult Armenian friend, if we have forests in America. It took me a minute to respond without reflexive gasping. I come from the Adirondacks, a quite similar mountainous area of New York State with plenty of forests as deep and alluring as this one. Of course, I’ve also been asked if we grow fruit in America. Rather than these questions boggling my mind these days, I accept them as the curiosity of people who generally have not been outside of the village they’ve lived in all their lives. What are they expected to know?

As we loaded onto the Urals for the return journey, I felt some regret for having come that day. “This is really outrageous,” I thought. Not that I’d wasted my time. I find all of Armenia and its offerings to be fascinating. But this trip did verge on the ridiculous for me, especially now that we were lurching our way back. Thoughts of grant research into infrastructure and tourism funding occupied my mind. Amazingly, the enthusiastic singing of the youngsters was no less than on our outbound trip. I focused on the riverbed, my gaze drifting towards places of tranquil repose had I the opportunity.

Much later on was when I heard about Karen Saribekyan. Now a deputy in the Armenian National Assembly, Saribekyan was a soldier fighting defense battles during the 1990-1994 Nagorno-Karabakh war on the Armenian border, preventing Azerbaijani troops from entering Tavush region and killing masses of innocent people. Apparently, one of his best strategies was to drive a tank into the Kirants Monastery, its brick walls keeping it from being seen by the enemy. From the safety of the church, the tank could shoot into the ranks of Azeri soldiers attempting to invade the region.

“Ah … I see,” said my little American mind, naive once again to the deep mysteries of this country, ignorant of the hidden meanings in this place for its people, stupidly making my shallow assumptions and criticisms.

Then, in some other part of my brain whispers the resident skeptic who says “But, is that all you’ve got? A tale of a war hero smartly doing his duty in a place already subjected to centuries of crumbling ruin? Why is everything that’s marvelous about Armenia born out of a past that seems to have stopped sometime in the 15th century? If you remove the Soviet scars of decrepit, impersonal buildings and the sad trappings of rusting industry, what you’ve got, outside of Yerevan, is an agricultural society with a fifth of its population unemployed and thousands having migrated elsewhere. “Is that all you’ve got?” screams the skeptic, having worked his way to the front of my brain, now shouting out from my eye sockets.

Two years I’ve now spent in laborious searching for cross-cultural understanding. I’ve practised acceptance like a virtuoso. I’ve tolerated challenging conditions. I sit with the old Tatiks, my peers, on the bench outside our apartment building wishing my language skills were better. But then, what would we really talk about beyond the same conversation I’ve been holding with them for-seemingly-ever? “Is that all you’ve got?” I’d want to say as I listen to their daily gossip and punishing thoughts about the various neighborhood miscreants.

Armenia — I will miss you when I finally leave. I will privately reminisce about many things. But you have to tell me what’s next. If I return in 15 years, will you show me? Will you have created great things with what you had inside you all the time? Will you have been finally driven by your desire for independence and self-determination to have decided on a unique future for yourself outside of western thinking – a new Eurasian kind of country unimaginable now? Is that what you’ve got? I’ll just have to wait and see.